January 17, 2017: the Navigo travelcard for Île-de-France (Paris and its region) is extending its reach. Annual or Imagine 4 subscribers can now take Batobus shuttle boats on the river Seine for an extra €40 a year.

Batobus operates a fleet of diesel-electric boats serving nine stations close to monuments in the heart of Paris.

With this Navigo+Batobus offer, Région Île-de-France, together with transport authority the Stif, is taking a first step towards opening up the waterways as an additional urban transport mode.

Over the next six months the two actors will be assessing demand for this service by Parisians, with an eye to possibly defining a more a tailored offer going forward. Right now, the shuttle boats, with 85% of their passengers being tourists and visitors – operate from a leisurely 10am, departing every 25 minutes or so; hardly ideal for rushing to work. Plus there’s the 12km/hr maximum speed limit for vessels on the Seine (18km if more than 20 metres from the banks), which means trips do take time.

30% of all travel in Paris is for home-work journeys

Despite scepticism from some quarters, this initiative is surely a step in the right direction, serving to raise awareness of the water as a transport mode of the future for our increasingly congested cities.

“This new offer forms part of the drive to develop the waterways beyond just transport  for tourists, and to extend Navigo to include all modes and so make it the open sesame, the unique travelcard for Île-de-France,” said Valérie Pécresse, president, Région Île-de-France and Stif (pictured below). 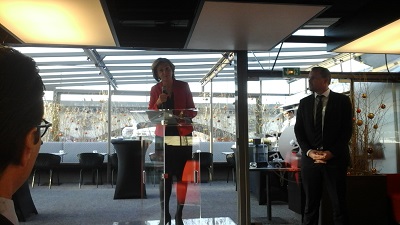 “Our objective is to revolutionise transport. In addition to plans for the waterways – the rivers Seine, Marne, and Oise, plus the canals – we are introducing 1,000 extra buses and park & ride facilities, plus have plans for a bike service for Franciliens [inhabitants of Île-de-France] and are studying 10 urban cable projects.”

In the coming months it will be interesting to see if the shuttle boat really does appeal to Parisians, and if so, who exactly? Students, people travelling off peak…?  A study by the Stif, to be released in June 2017, should provide insight…

Cable Brest – more than a flight of fancy!